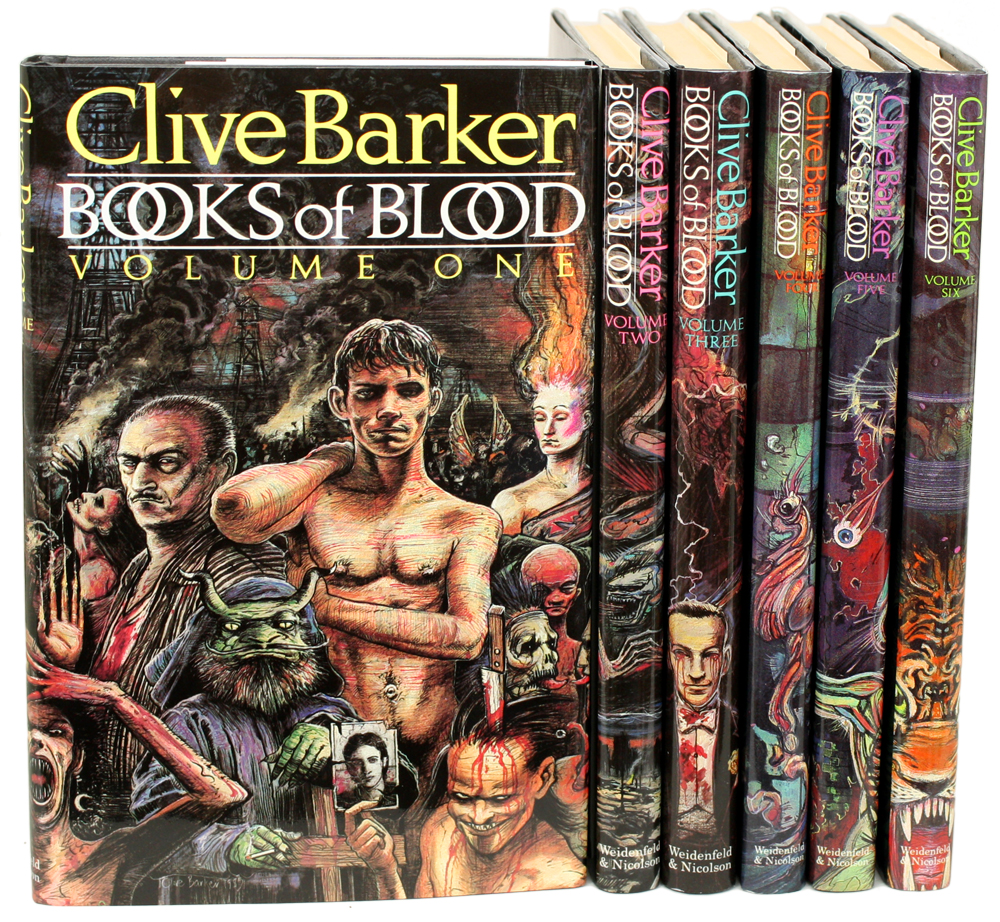 When Clive Barker’s Books of Blood began their publication in 1984, it would be fair to say that Stephen King had already reinvented horror as a popular genre. Throughout the 1970s and early 1980s, King had published more than a dozen novels. Still, even Stephen King himself viewed the publication of the Books as a watershed moment for horror: it was the Books of Blood that led King to famously call Clive Barker “the future of horror.”

Over the course of 30 stories published in six volumes, Barker unveiled a new geography of horror; continents of the imagination, teeming with fantastical demonic life and grisly death, antiheros, soiled saviors, and (of course) the impossible pleasures of monstrous and magical sex. The Books feel incredibly relevant to modern horror; so much so that reading them more than 30 years after their original publication is a little like looking at the original plans and blueprints for the building you’ve lived in for decades.

Philip K. Dick and Clive Barker have something in common; both of them have surprisingly low name recognition with the general public, given how much of their work has been adapted into hugely successful films (albeit, often in a form mutated from the original text). Of the 30 stories contained in the Books of Blood, almost a third have been made into movies, including “the Forbidden” (which was filmed in 1992 as Candyman), “the Last Illusion” (filmed in 1995 as Lord of Illusions), “Rawhead Rex” (filmed in 1986), “the Midnight Meat Train” (2008), and “Dread” (2009), among others.

As with Dick, it’s more than a little strange that Clive Barker proved so successful in Hollywood. In Dick’s case, it’s odd because his stories are so steeped in drugs, mental illness, and existential uncertainty; in Barker’s, primarily because of the intensity of the gore and sex and the stories’ unconventional lack of moral clarity. In a Stephen King story, you’re likely to get a hero, a villain, and a more-or-less black-and-white vision of the world. Good fights evil, hero triumphs over monster, normalcy is resumed. Barker’s stories tend to carry no more of a moral message than we might glean from the doings of a spider in a rainforest canopy, or a feral dog scavenging on a landfill.

Not to tip my hand, but politically and socially, I tend to land more on the side of the outcast when choosing whom to throw in with. Thus, while I love Stephen King and have nothing but respect for his craft, Barker’s worlds always made more sense to me. Writing for conservative outlet National Review, Tim Cavanaugh said the following about King and Barker:

“[King’s] work is shot through with hard-headed pragmatism and traditional morality that, if viewed from a certain angle (i.e., directly), seem clearly conservative. Few horror creators (Clive Barker being an occasional exception) ask us to root for the devil.”

I couldn’t have put it better myself, although I think that Cavanaugh and I root for different teams, so to speak. To root for the devil – the monster – is to cheer for the underdog, isn’t it? Or perhaps – and this is a theme I see with increasing frequency in 2019 in everything from the Walking Dead to Game of Thrones – perhaps it’s not that simple, and never was or will be. Perhaps we are all, at one level, monsters, red in tooth and claw, hunting and rutting and taking our pleasures where we can.

The pleasures that Barker introduces us to in the Books of Blood are often grotesque, to put it mildly. A content advisory for the six volumes would have to include (in no particular order) bestiality, necrophilia, assault, torture, and scenes of intense violence. Barker is, after all, one of the best-known names and figureheads of the so-called splatterpunk movement in horror fiction, which was most prominent from the mid-1980s to the mid-1990s. Splatterpunk is characterized by extreme gore, transgressive themes (including unconventional sex), and, often, a milieu of urban decay and moral chaos – all represented splendidly in Barker’s stories.

While I quite enjoy Barker’s novels, I think both his prose and his plots are at their best in a shorter format. I don’t think this a failing or inadequacy on Barker’s part in the least. Some works may have lent themselves to longer narrative arcs, to be sure – for example, I would have loved to see what Barker did with a novel-sized treatment of “Pig Blood Blues” – but for the most part, Barker’s tales are just right in length, clocking in at longer than your average short story, but shorter than your average novel (or most novellas). Like highly-compressed bursts of squelched static sent via intergalactic radio array, these tales are dense, possessed of their own internal logic and atmospheric rules, and – once teased out and appreciated – full of a surprising quantity of information for such brief transmissions.

The Books of Blood have a mythos that, when it isn’t consistent, at least rhymes with itself. These stories come saturated with the sweet, sulfurous perfume of Hell itself; always, in Barker’s prose, given the capitalization that such a proper noun deserves. Hell may be variously described as a person, place, or thing, but it is always a palpable presence in these stories, despite their innovation and largely modern, urban settings.

35 years after their publication, these stories don’t feel dated in the least. For any fan of horror who hasn’t read them, I can’t recommend these volumes strongly enough – not only on their own merits and for the pleasure of Barker’s prose, but because you can see much of the structural, thematic, and artistic DNA of modern horror in them.

Not to mention that they are often a Hell of a lot of fun.